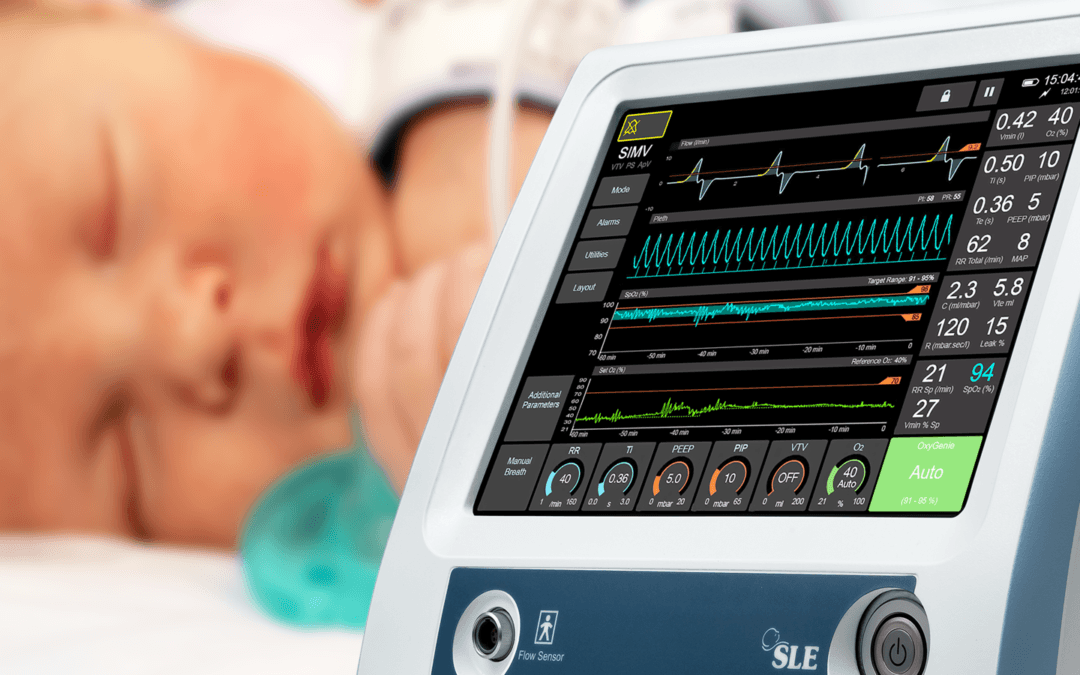 OxyGenie® is a complex piece of software that can control the oxygen delivered to a sick baby whilst on a life-support ventilator. It is a novel bespoke algorithm that uses sophisticated feedback loops and machine learning to control the supply of oxygen in the air that is delivered to the baby. This breakthrough system was developed by medics in the Tasmanian Health Service working with scientists and engineers from the School of Engineering and ICT at the University of Tasmania.

At that time, they were looking for an advanced infant ventilator in which to launch their system. Since August of this year, it has been incorporated into SLE’s flagship ventilator, the SLE6000.

SLE, based just outside London, is a pioneer of neonatal ventilation and one of the few companies worldwide specialising in this area. Since their founding in 1956, they have developed and introduced a number of neonatal-specific improvements in ventilators that have improved the lives of thousands of new-born babies. This new software, which SLE is calling OxyGenie (because “It works like magic!”) is destined to improve many more.

Oxygen is one of the drugs most frequently given to neonates, often with the highest concentrations given to those with the least developed defence mechanisms to its potentially toxic side effects. Even minor variations in blood oxygen levels may affect longer-term outcomes such as mortality, retinopathy of prematurity (ROP) or necrotising enterocolitis (NEC), as has been shown in a number of recent studies.

The importance of closely maintaining an effective baseline target range, avoiding intermittent hypoxaemia or hyperoxaemia (e.g. an oxygen level of <80% or >95%) is equally important. Keeping the baby’s oxygen levels within this range can be a very time-consuming and difficult activity.

With the high workload medical staff caring for preterm infants often face, an automatic O2 system that can help reduce the time spent adjusting the ventilator and allow staff to spend more time caring for the patient is invaluable.

As with all medical equipment, safety is paramount. To ensure this the regulatory system is rigorous in its implementation. This means that developing a new system (particularly one which controls the administration of a drug such as oxygen) is filled with obstacles and necessarily time-consuming validation and paperwork.

However, SLE managed to take the software from its developers, and in a project that typically might take three years or more, incorporate it into their new ventilator in less than two years.

It was finally approved and released in the Summer of 2018, and then on a controlled basis since regulations insist upon a Post Market Survey. However, expectations are high, and SLE has been receiving enquiries and requests for demonstrations from all over the world.

Developing a medical device is not easy! There are lots of regulations and requirements to ensure absolute patient safety, particularly on a life-sustaining device which, by definition, must be designed to be as failure-proof as possible. It can take years to get designs tested and approved for commercial distribution.

Add to this a conservative medical audience who are quite rightly nervous about change and often require significant clinical data before even considering a new technology. This means any company in this business has to be in it for the long run. SLE addresses this by employing a team of Clinical Specialists who train doctors and nurses in the safe and effective use of their equipment, travelling the world and spending time showing new and potential users how to get the most out of their SLE ventilators. These same specialists also train distributor’s specialists in every country where their products are available to ensure a ‘chain of knowledge’ is passed onto every end-user.

Once you have jumped all of the various hurdles put in your way, the medical community can be very welcoming and is already giving serious consideration to the OxyGenie concept. Some large installations have been planned and various medics are planning research papers on the use of this new automatic control system.

The University of Tasmania is now starting to enjoy the commercial advantages that this technology is providing to their business, so the lesson for them has been around the value of scanning the technology available and partnering early with the best R&D providers.

5. How many new jobs has this innovation created?

This is difficult to assess. Although there was a team of ten or more people working on the project during its development at SLE, they had been taken off other projects, so the nett increase was negligible. However, it is anticipated that there will be an increase in sales numbers for the SLE6000 during the next year or so which will lead to new positions being created for the manufacture of this product. Additionally, there are other opportunities being investigated for further products using the OxyGenie software and this will undoubtedly lead to more employment in the future.

If you want to know what #funding & support is available for #startups & #innovative businesses then check out latest #innovation newsletter https://twitter.com/natchap99/status/1300260681262837760

Check out all of this amazing #research from @IFE_QUT @QUT in our latest Insights 👇🏻 Reach out if you're interested in finding out more #techology #innovation #collaboration https://twitter.com/IFE_QUT/status/1300601934886440960

A shout out of thanks to the team at the Australian-first mask testing facility run by @CSIRO. The lab in Melbourne is giving Aussie manufacturers confidence they can meet rigorous standards when supplying vital surgical marks to frontline medical staff and other Australians. https://twitter.com/sunriseon7/status/1300203486026502144